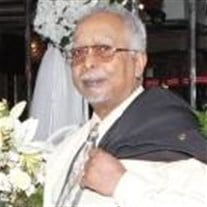 Carlton Clement Wong was born in Three Friends, Essequibo, British Guiana, South America on December 14, 1935. Born to Albert Wong and Theresa Maycock Wong. Clement was the youngest of fifteen children, five of who survived to adulthood. He was preceded in death by both parents and all his siblings. His schooling started at All Saints Primary School in New Amsterdam, Berbice. In 1959, he relocated to Georgetown to advance his teaching career. In 1961, he graduated from Guyana Teachers College and was assigned to Craig Government School as Assistant Master. In 1968, he was the recipient of a Guyana Government Scholarship to study Technical Education in Australia. 1972, He moved to Black Bush Polder where he was Headmaster of Joanna Primary School. In 1979, he married his long time devoted, loving, wife Sandra. In 1990, he retired as Headmaster from Corriverton Primary School. Following this retirement, he migrated to the United States and has lived in the Borough of Brooklyn and Richmond Hill. He was a survivor of the September 11th terrorist attack at the World Trade Towers. Left to mourn his passing are his devoted and loving wife Sandra Wong, his seven children: Eulalee, Ranceford (Denise), Clement, Jr., Terese (Edward), Clifford (Adebessi), Vieoletta and Juanita. Grandchilden: Tyanne, Ranceford Jr., Kareem, Kahlil, Shemar, Kayl, Akeem, Pernella, Denzil, Angelique, Atira, Anika, Cassius, Jannien, Millia and Renee and the late Adrian and Micheal. Great Grandchildren: Deon, Dior, Denisia and Shookwan. Brother in law, Bahadur, Pamp, Bhoop, Jagdeesh and three others, Sister in law, Sheila, Leila, Rattie, and Mella. Nieces Thelma, Evelyn, Agnes, Avis, Donna, Cindy and many others. Nephews Marc (Deborah), Kashwar, Rakesh, Avinash, Gewan and many others. Childhood compadres Samuel Archer and Olin King. His time on earth has now expired but his legacy will live on forever. Today, his baton is passed to another generation. We are reminded that life is not an empty space between our birth and our death but rather, it's what we do with the time we spend between the two. Clement's mission is now over and his tasks are well done. As we comfort each other, let us lean on the memories he created for us all and together we pray that his soul finds eternal rest.

The family of Carlton Clement Wong created this Life Tributes page to make it easy to share your memories.

A comforting word from you means a lot.

Send flowers to the Wong family.